Greenhouse gas (GHG) reductions is a key dimension – the EU energy trading system (ETS) a key tool in realizing the Energy Union – yet it does not cover the building, transport nor agriculture sector (non-ETS) that increasingly represent an important part of the energy system. 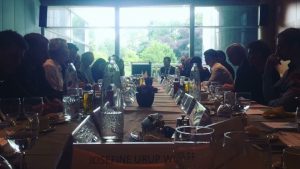 The European Commission proposed a revised ETS followed by a new proposal on the implementation of the non-ETS target alongside land use, land use change and forestry (LULUCF).

The European Parliament has an important role in not splitting but integrating measures on a system-based approach that mirrors interlinkages in the negotiation of measures for reducing emissions in non-ETS sectors.

Energy Solutions presents key recommendations upon dialogue across national, sectorial and individual interests as a direct response to the ambition of the Energy Union. 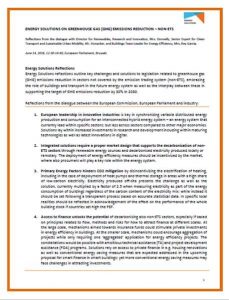 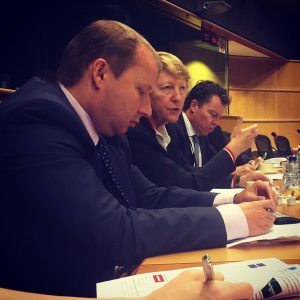 The potential multiple benefits spell out the latent interlinkages within energy regulation that too often is  developed for isolated silos of the energy system alone. The energy system instead needs to be seen as a whole with strong links to other policy areas in providing the regulatory framework.

The legislative reviews, discussions and ultimately amendments of the directives provide an opportunity to achieve the multiple benefits of integrated energy solutions.

Energy Solutions presents its reflection on challenges and solutions on the role of energy efficiency within the future energy system. 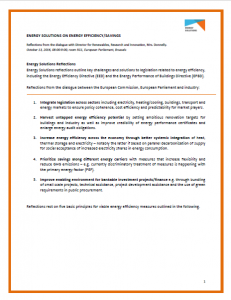 The future energy market is key for free competition between energy providers, best prices for energy consumers and efficient decarbonisation. 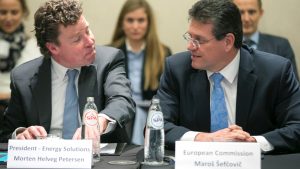 The energy system increasingly depends on the electricity sector with e.g. market coupling to heating and transport; yet barriers remain – nationalisation threatens the cost-efficiency of the electricity system like the basic design of marginal pricing in the wake of increasing shares of variable renewable electricity.

Technological developments and application of demand response and storage are key in shaping the future energy market, delivering return on investments – it requires an evolutionary, liquid and simple market design.

Policy proposals presented (Clean Energy for All) outline a list of no-regret options that improve the efficiency of the market today; notwithstanding the importance of governance-backed arrangements for attracting sufficient investments.

Electricity systems are set on the right pathway, economically and technically able to handle high shares of variable renewable energy sources – next step now is to get the market design and regulatory framework in place in delivering the transformation. 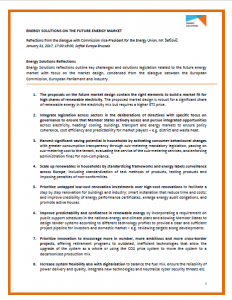 The transition from dominantly fossil to clean energy sources within the energy system illustrates the role of policies directly facilitating the roll-out of renewable energy and indirectly resulting in the decline in demand – yet concerns on security of supply increasingly make countries turn to national measures for electricity supply to match demand in the medium-long term.

The medium-long term perspective indeed is important in attracting investments that address the anticipated capacity gap in the transition from fossil to renewable energy sources – capacity mechanisms and state aid bring along competition policy implications for a secure, sustainable and competitive Energy Union:

Legislation (Clean Energy for All) now needs to address the design of competition policy for a well-functioning and interconnected energy market. 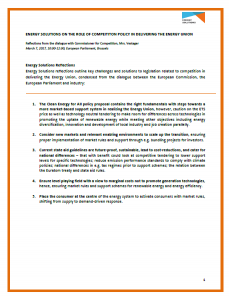 Decarbonising the Building Stock and the Energy Supply

Buildings will be key in achieving the energy transition as well as the EU greenhouse gas (GHG) objectives by 2050 – it requires a high ambition-level in decarbonising the general building stock with a clear focus on existing buildings. 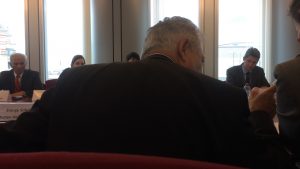 The current renovation rate of the building stock at approx. 1% per year spells out the opportunity for further pushing the decarbonisation.

The revision of legislative acts (Energy Performance in Buildings Directive (EPBD)) is a unique opportunity for outlining political ambition and sending a clear investment signal – currently, only half the level of investments is realised in meeting the EU 20% energy savings target by 2020.

Energy Solutions outlines principles as a direct response to the ambition of realizing the Energy Union. 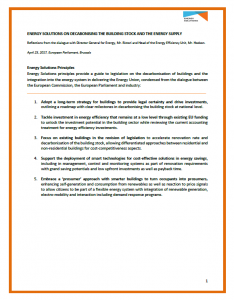 The Interplay between Market Design and Variable Renewable Energy

Coordination of trading alongside integration of the electricity system rests on effective price signals from the market – a market that is undergoing significant changes including zero subsidy bids for offshore wind, further interconnection, storage, sector-coupling, electro mobility, demand response through digitalisation, flexibilization of conventional thermal power generation capacity to mention but a few changes.

Changes within the market cannot be centrally planned in finding the optimal configuration of the energy system due to the complexity and pace; instead market regulations must define the appropriate framework for market players to innovate and develop new technologies and business models.

The challenge remains at our feet: The high way for transport of electricity – the transmission grid – is under-dimensioned both within and between key countries:

It is often advocated that electricity system security will be reduced as volumes of renewables increase due to the variable nature of wind and sun, but who will deliver the electricity when the wind does not blow and the sun does not shine? Here again price signals are crucial to ensure security of supply. Flexible markets are driven by scarcity pricing, thus, policy-makers must reduce flexibility barriers instead of subsidising flexibility. Subsidising flexibility reduces the robustness of the market price, removes investment signals, and distorts the coordination between different actors that lead to higher costs to society.

The legislative proposals (Clean Energy for All) raises two immediate action points with need for further development, relating to the trading of electricity and integration of the electricity system:

The interplay between market design and variable renewable energy deserves specific attention given that electricity generated from renewable energy sources (renewables) increasingly will power economies regionally and globally, demanding action to the imbalance and consequently need to rebalance:

Energy Solutions outlines principles as a direct response to the ambition of an Energy Union. 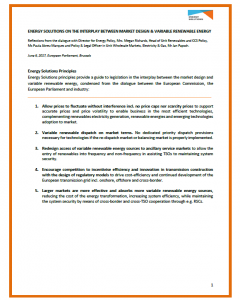 Incentivising the Consumer to Make Choises that Optimise the Energy System 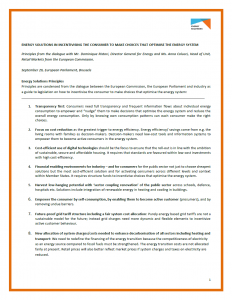