On 8 July, the European Commission unveiled its Energy System Integration and Hydrogen Strategies, which will be crucial in laying the foundations for EU decarbonisation efforts in the coming years. As a firm supporter of the EU’s ambitious climate targets, Energy Solutions member Equinor has a pipeline of pioneering projects which can deliver significant emission reductions in just a few years. With the right regulatory framework in place and financial support, clean hydrogen enabled by Carbon Capture and Storage (CCS) is ready to contribute towards an integrated and decarbonised European energy system.

The first pilot project is being developed by the H2morrow steel consortium, consisting of Equinor, Open Grid Europe (OGE) and Thyssenkrupp Steel Europe (tkSE), in the industrial Ruhr region of Germany. The project aims to decarbonise tkSE’s steel production by 2025/2030, delivering clean steel and reducing CO2 emissions by up to 10.5 million tonnes each year compared to the existing production process.

The project does this by replacing the highly polluting coal currently used at Germany’s largest steel mill in Duisburg with CCS-enabled hydrogen. On top of the avoided CO2 emissions, the project will also contribute to preserving 25,000 jobs which would otherwise be lost, as the current steel production processes are simply not compatible with a future climate-neutral Europe.

Meanwhile, the H2M project is being developed in collaboration with Vattenfall and Gasunie in the Dutch Eemsdelta area of Groningen. Under these plans, Vattenfall’s Magnum power plant will be converted from its present natural gas energy to CCS-enabled hydrogen, with the resulting CO2 transported to be stored safely off the Norwegian coast under the North Sea. As early as 2024, this project can reduce the CO2 emissions of the Netherlands by 2 million tonnes annually. 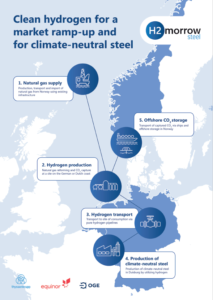 The Zero Carbon Humber project, in partnership with Drax and National Grid, will contribute to decarbonising the industry and power sectors located in the Humber region, the largest industrial cluster of the UK. The project envisages a large-scale fuel switch to hydrogen, accompanied by a CCS system to transport CO2 emissions for safe and permanent storage under the North Sea. As part of the wider project, Equinor will develop the first demonstrator for the production of CCS-enabled hydrogen, H2H Saltend, enabling the first at scale production of low carbon chemicals, the production of low carbon electricity and heat, and UK’s first low carbon infrastructure for hydrogen and carbon emissions.

Ultimately, these technological solutions can provide the foundation for a net zero industrial cluster in the region by 2040, ten years ahead of schedule in terms of EU and UK climate-neutrality ambitions. In addition, the Drax Power Station is developing CCS technology for this project as bioenergy carbon capture and storage (BECCS), which once upscaled will produce negative emissions.

Crucially, these three projects all depend on CCS-enabled – or ‘blue’ – hydrogen to deliver significant emissions reductions and accelerate the transition towards a more integrated energy system in Europe. Their development will also lay the foundation for the up-scaling of a European hydrogen market, supporting in turn the deployment of ‘green hydrogen’ – produced via electrolysis from renewable energy sources – which is not yet financially viable to be deployed at scale.

CCS-enabled hydrogen provides the opportunity to make incremental and tangible progress towards realising a European hydrogen value chain, serving as an important building block for the future energy system. Since the projects will depend on developing hydrogen infrastructure, they will pave the way for the deployment of green hydrogen, while also supporting the integration of intermittent renewable energy into the system, as hydrogen is a reliable and flexible mode of energy storage.

Pilot projects, such as those outlined here, should be the kind of projects the EU should looks towards as it seeks to integrate the energy sector and decarbonise others. With the right support, these clean energy technologies will be ready to be deployed at scale, while contributing to EU climate objectives and safeguarding European jobs.