The ocean is a dominant feature of our planet, covering 70 per cent of its surface and driving its climate and biosphere. Ocean-based renewable energy—such as offshore wind, floating solar, tidal and wave power—could meet nearly 10% of the annual greenhouse gas emissions reductions needed by 2050 to keep global temperatures under 1.5ºC above pre-industrial levels, according to a report released by the High-Level Panel for a Sustainable Ocean Economy.

Ocean-based mitigation options could reduce global greenhouse gas (GHG) emissions by nearly 4 billion tonnes of carbon dioxide equivalent (CO2e) per annum in 2030 and by more than 11 billion tonnes per annum in 2050, relative to projected business-asusual (BAU) emissions. Reductions of this magnitude are larger than the emissions from all current coal-fired power plants worldwide and more than China’s total emissions in 2014. As table 1 shows, most of this climate change mitigation potential is expected to come from offshore wind. 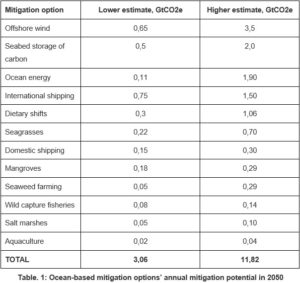 The Action Coalition has been formed in response to the September 2019 Call for Ocean-Based Climate Action made by the High-Level Panel for a Sustainable Ocean Economy, with additional partners including Global Wind Energy Council and the UN Global Compact.

Collaboration between nations and companies is needed to speed up the sustainable deployment of ocean renewable energy. The Ocean Renewable Energy Action Coalition will work together to accelerate the opportunity presented by ocean renewables to achieve the Paris Agreement goals. It will also prepare a vision for 2050, highlighting the actions that industry, financiers and governments can take to sustainably scale-up offshore wind, and thereby contribute to the UN Sustainable Development Goals and global decarbonization goals.

Initial outputs will be announced at the UN Ocean Conference in Lisbon in June 2020.